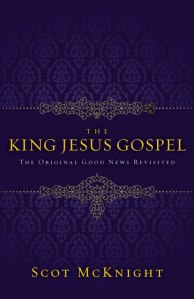 I like to maintain the habit of reading multiple books simultaneous. An interesting thing that happens occasionally is when two or more books happen to ‘interact’ over an idea as I read these books in conjunction. Something like this happened as I just finished Scot McKnight’s The King Jesus Gospel and am near the front end of Robert A. Paterson’s Salvation Accomplished by the Son.

In The King Jesus Gospel (which, by the way, is a good book, although many conservative evangelicals like myself will quibble over emphases and the way he frames/words things), McKnight makes the point that too often evangelicals have reduced the Gospel to the cross of Christ to the exclusion of “the full Story of Jesus, including his life, his death, his resurrection, his exaltation, the gift of the Holy Spirit, his second coming, and the wrapping up of history so that God would be all in all” (119). However, this was

Not so in the early gospeling [i.e., evangelism], for in those early apostolic sermons [he is referring to those in the book of Acts primarily here], we see the whole life of Jesus. In fact, if they gave an emphasis to one dimension of the life of Jesus, it was the resurrection. The apostolic gospel could not have been signified or painted or sketched with a crucifix. That gospel wanted expression as an empty cross because of the empty tomb (120).

But, without necessarily pitting McKnight’s argument against Peterson’s (to follow), one might get the impression from McKnight that the apostle’s gospeling in the book of Act’s didn’t provide much comment (if any) on the theological, redemptive significance of Jesus’ death. … And that’s where Robertson’s observations serve as a helpful conversation partner.

Robertson begins by noting that although “the death of Christ is mentioned frequently in Acts,” “the emphasis of Acts is not on Jesus’ death but on his resurrection and exaltation” (79). He agrees with McKnight. And he notes,

Although Acts contains many references to the Messiah Jesus’s suffering, it does not explain the saving significance of his death as clearly as the writings of John, Paul, the author of to the Hebrews, or Peter [in his epistles that is] do. Instead, Luke [the author of Acts] accents the saving significance of Jesus’s resurrection…. (emphasis added) (80)

Again, all of that is very true.

1. Acts identified Jesus with the ‘Suffering Servant’ of Isaiah 53.

In Acts 8, in conversation with the Ethiopian Eunuch, Philip interpreted the ‘Suffering Servant’ of Isaiah 53 as Jesus (vv.26-35).

In light of this, Robertson observes,

None of these seven passages [in Acts], which identify Jesus with the Servant of the Lord and righteous one of Isaiah 53, explains the saving significance of Jesus’s death. But their pointing to the most powerful Old Testament passage to treat that theme is suggestive of the redemptive significance of his death (81).

2. Acts describes Christ’s death as “hanging on a tree.”

That might seem to be an odd and unimportant thing to point out. But the background to this observation, and the language used by the apostles in describing Christ’s death this way, is Deuteronomy 21:22-23, which states that anyone executed and hung on a tree was cursed by God.

Surely no Christian preacher would have chosen to describe the death of Jesus in terms which drew attention to the curse of God resting on the executed criminal, unless he had first faced the scandal of the Cross and had come to believe that Jesus had borne the curse on behalf of others.

Christ redeemed us from the curse of the law by becoming a curse for us—for it is written,“Cursed is everyone who is hanged on a tree.”

Thus, although in Acts the apostles focus is on the resurrection and exaltation of Christ (though certainly not to the exclusion of His death), and although they do not often explicitly tease out the saving significance of Christ’s death, they do seem to frame that death in terms of the ‘Suffering Servant’ of Isaiah 53 and Christ’s role as the curse-bearer in light of Deuteronomy 21.