Redemption Accomplished and Applied by John Murray
My rating: 5 of 5 stars

Lead a group of men in my church through this book. A lot of them found the initial chapters a bit more difficult to weigh through. I would agree that part 1 felt more polemical, and could feel a bit more technical or abstract for those less familiar with this sort of writing or subject matter. However, part 2 seems to take a shift in tone. In these latter chapters especially, one of the things I appreciated about this book was the doxological tone and orientation naturally woven throughout. As I read, I found myself experiencing gratitude to God and standing in awe of Christ. I believe this book originally came out of a series of lectures Murray delivered (?). And it certainly reads like that. It feels a bit different in that way from other systematic treatments of soteriology. Very insightful and well done.

View all my reviews.

The following is a response I put together in regard to a question that came up in a book study I was leading through John Murray’s Redemption Accomplished and Applied.

So one of the questions that emerged from our discussion tonight was, does God love the non-elect?

Clearly he loves the elect. And if nothing else, he loves them in a unique way unto salvation. But the question was raised, does he also love everyone in some sense (even if not having chosen to save them), even the non-elect?

Here are some helpful resources:

(All of these men are Calvinists by the way. So they are working from these same assumptions that God has a distinguishing love for the elect.)

At least one example of the Bible actually using the word “love” in reference to God’s disposition to the seemingly non-elect is Matthew 5:43-48. Here Jesus tells us to love our enemies precisely based on the model that God — it is the seemingly necessary implication of the analogy — loves his enemies (if God doesn’t love his enemies, the comparison would seem to break down). Namely, God here shows his love to enemies by causing rain to fall on the just and unjust. So we are likewise to love our enemies by showing good to all as well, even enemies.

Similarly Luke 6:35 – “But love your enemies, and do good, and lend, expecting nothing in return, and your reward will be great, and you will be sons of the Most High, for he is kind to the ungrateful and the evil.” How are we sons of God (i.e., like God here — “like father, like son”)? By loving our enemies like he does. In other words, he loves his enemies. And I think “enemies” here most naturally (at least) includes the non-elect.

As I said during our discussion, God is also said to love Israel (e.g., Deut 7-8), which was a nation composed of both believers and, maybe even more predominantly, non-believers.

An example of this might be Hosea 9:15, where God speaks of no longer loving unbelieving Israel who is about to experience his judgment. This is certainly by and large an unbelieving, non-elect people here; and yet he speaks of having shown them love.

You might also argue there’s a seeming ludicrousness if God were to command us to love all people as something morally right that we must do if it were not something he himself was also doing. It would seem to imply he’d be failing to do something that is morally right for him to do. In other words, he would seem to be sinning, which is an absurdity.

Yes, it’s important to clarify the unique expression of the love God has the elect. But I also think it’s appropriate and Biblical to speak of a love God shows even towards the non-elect.

“Practice is the most proper evidence of trusting in Christ for salvation. The proper signification of the word trust, according to the more ordinary use of it, both in common speech and in the Holy Scriptures, is the emboldening and encouragement of a person’s mind, to run some venture in practice, or in something that he does, on the credit of another’s sufficiency and faithfulness. And therefore the proper evidence of his trusting, is the venture he runs in what he does. He is not properly said to run any venture in a dependence on any thing, who does nothing on that dependence, or whose practice is no otherwise than if he had no dependence. For a man to run a venture in dependence on another, is for him to do something from that dependence, by which he seems to expose himself, and which he would not do were it not for that dependence. And therefore it is in complying with the difficulties and seeming dangers of christian practice, in a dependence on Christ’s sufficiency and faithfulness to bestow eternal life, that persons are said to venture themselves upon Christ, and trust in him for happiness and life. They depend on such promises as that, Matt. 10:39. ‘He that loseth his life for my sake shall find it.’ And so they part with all, and venture their all, in a dependence on Christ’s sufficiency and truth. And this is the scripture notion of trusting in Christ, in the exercise of a saving faith in him. Thus Abraham, the father of believers, trusted in Christ, and by faith forsook his own country, in a reliance on the covenant of grace which God established with him, Heb. 11:8, 9.” 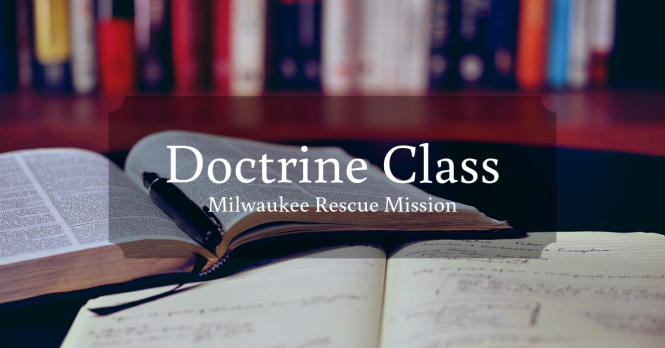 On Wednesday mornings I volunteer at the Milwaukee Rescue Mission and teach a basic doctrine class in their New Journey rehabilitation program, as well as preach chapel. Attached is a zip file to the full slides and handouts I use for the class, as well as other resources. There are 24 lessons total (originally composed Spring of 2018).

Doctrine of the Holy Spirit (19)

Doctrine of the Church

See all sermons from this series on 1 Peter.

In this episode, Kirk sits down with professor and well-regarded church historian, Dr. Scott Manetsch, to discuss what church life was like in Reformation-era Geneva under the ministry the John Calvin.
I’m excited to announce that Logos Bible Software has come on as an official sponsor of the Church Theology podcast! - And not only are they sponsoring our episodes, but in addition, listeners of the podcast can receive a special discount of Logos by going to logos.com/partner/kirkmiller and using my discount code KIRK8.
Looking forward to preaching Hebrews 2 tomorrow morning — Sharing Our Flesh; Tasting Our Death. - #Hebrews2 #Jesus #Incarnation #Death #Resurrection #Christ #Advent #Christmas #Athanasius @crosswaymilwaukee
I was able to publish an article in the most recent issue of Didaktikos: Journal of Theological Education. : The article is simultaneously a reflection on the transformative nature of God's self-revelation, as well as a tribute to my former professor, Scott Manetsch, who personally embodies this theology. : #Didaktikos #Theology
My Tweets